Gay rights in Ukraine are in the hands of Dutch 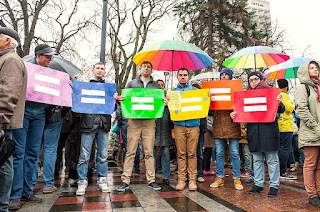 By Bogdan Globa at euobserver.com

If you follow the situation of LGBT people in Ukraine, you’d know that it, like many other former Soviet countries, cannot be called friendly to gay, lesbian, bisexual and transgender people. To put it mildly.

After the collapse of the USSR, Ukraine was one of the first states to abolish criminal penalties for “sodomy”. But LGBT rights are still a taboo subject in public discourse. Just three years ago, parliament considered a Russia-type law to ban “promotion of homosexuality”.

The former regime of Viktor Yanukovych and Mykola Azarov, in its last year in power, fully espoused the Kremlin’s homophobia. They falsely claimed, for instance, that the EU was going to force Ukraine to legalise gay weddings.

So, what’s changed for LGBT in Ukraine after it signed the EU association agreement? Social mores haven’t changed. But there is a change, both in political rhetoric and in concrete terms. The EU agreement has a number of anti-discrimination provisions. Progress in this difficult area is a litmus test on whether Ukraine really shares European values.

Last November, MPs passed a law which bans discrimination based on sexual orientation and gender identity at work. It wasn’t easy. The Verkhovna Rada had to vote on it six times before it got through. Passionate debate spilled beyond the walls of the parliament on to the street.

The parliament speaker Volodymyr Groysman also made a brief hate-speech before the final vote. “God forbid this to happen, we’ll never support it,” he said on the issue of gay marriage.

The government, also in November, adopted an action plan as part of its national strategy on human rights. It followed painful debates. But the result is notable. The plan includes a section on LGBT rights. It pledges to put forward a bill on civil partnerships by December 2016. It also pledges to introduce new penalties for homophobic crimes in the penal code.

Early this year, Ukraine also created a new police unit to investigate hate crimes, including anti-LGBT crimes. We’ve come a long way in those three years: from trying to ban “homosexual propaganda” to ambitious plans for protecting the property rights of same-sex couples.

I don’t believe the politicians really care about minorities. But they’ve realised that they can’t throw LGBT rights off the EU integration train. In this context, the Dutch referendum on the EU association pact is a sad development.

The Netherlands is the only EU country that has not fully ratified the agreement. Opinion polls indicate Dutch people will vote against it on 6 April. It’s a non-binding referendum. But a big No could cause a real crisis in EU-Ukraine relations.

Part of the referendum debate is fear that an unreformed Ukraine will be a burden on Europe. But this argument turns reality upside down.

The association pact is a blueprint for reform and it’s already producing tangible results. It obliges Ukraine to implement EU economic, political, and social norms without obliging the EU to do anything on Ukraine’s EU membership.

If the Netherlands stops ratification, the EU will be faced with a stagnant Ukraine which has burned its bridges with Russia and which has nowhere to go. 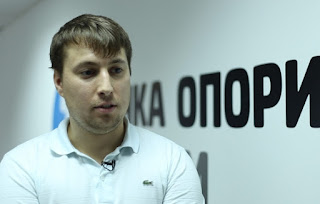 Bogdan Globa is Director of the All-Ukrainian
Charitable Organisation Fulcrum, a Kiev-based NGO