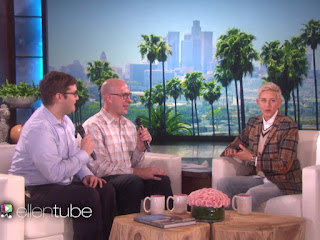 In a heartwarming segment on her show, Ellen Degeneres chatted with new fathers Justin and Adam about their new triplets.

The couple, who for years had wanted a family of their own, took the route of surrogacy and were blessed with not one, not two, but three children who were all born this past June.

Ellen showered them with gifts to help take off some of the burden of their new financial situation. The baby boys received a special triplet stroller that says “Our Daddies Were On Ellen”, and a $10,000 gift from Shutterfly during their appearance.

Not only that, but Ellen declared she will cover the dads’ diaper expenses until the babies no longer need to wear them.