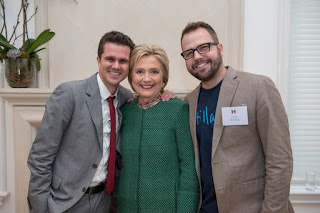 Colin Ebeling, an openly gay filmmaker, is the son of Clinton’s childhood best friend, Betsy, and he simply knows her as "Aunt Hillary."

In a Facebook post, Colin says that his mother and Ms. Clinton remained close over the years, describing her as "a warm, funny lady who taught me how copious amounts of hot sauce on your scrambled eggs will keep you healthy."

He declares that Clinton, who spoke at his high school graduation and lingered after her speech to pose for pictures with the students, was extremely supportive of his sexuality.

He writes that she "congratulated me when I came out of the closet, when I got my pilot’s license, when I married my husband and when we adopted our baby girl."

And he adds: "Hillary has included me and my husband in countless events over the years and always greets us with warmth and sincere affection. Several times, we’ve had the privilege to sit down with her and swap stories."

Finally, Colin admits: "When you cast your vote for Hillary, I just want you to know you’re backing not only the most qualified presidential candidate in history, but a real person, a woman who values family, friendship and service to her fellow Americans above all else." 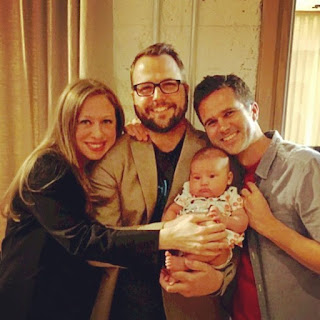