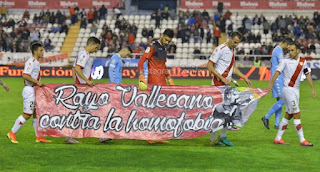 Rayo Vallecano, a soccer team which plays in the second division of Spain, performed an act on the field to challenge homophobia.

Before the match against Girona FC, the players of Rayo Vallecano took the field and showed a banner with the slogan: "Rayo Vallecano against homophobia". Besides, its supporters were on the stands with colored globes and other banner reading: "All colours are beautiful".

Remember the players of Rayo Vallecano usually dress a pride-themed kit which a prominent rainbow on their t-shirts, and they also played with rainbow laces in their boots on the occasion of the International Day Against Homophobia in Sport.

But that is not all in Spanish soccer, in the same vein Barcelona FC, one of the biggest teams in Spanish top division, released a video promoting inclusion and against homophobia.

I hope other European soccer teams follow the example. 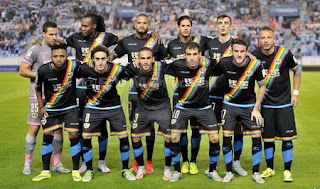