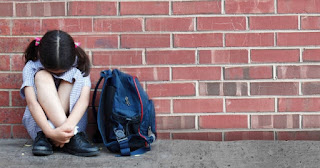 Nearly half of LGBT pupils experience bullying in the U.K., a new report published by LGBT charity Stonewall, amid growing concern that transphobia is on the rise in schools.

Stonewall’s School Report 2017, conducted with Cambridge University's Centre for Family Research, looked into the experiences of over 3,700 LGBT pupils.

Although homophobic abuse has declined in recent years, the research shows that 64 per cent of  transgender pupils have been subject to bullying, with many schools found to be "not equipped" to support transgender pupils.

While seven in 10 LGBT students believes their school will not tolerate homophobic bullying, less than half believe their teachers are as stringent when addressing abuse directed at transgender students.

Transgender  pupils are also twice as likely to try to take their own lives. Two in five transgender pupils have attempted to commit suicide, compared with just one in five among lesbian gay and bisexual pupils.

The likelihood of bullying due to sexuality varies throughout the country, it adds. The highest rate of bullying was reported in Wales, where 54 per cent of LBGT pupils are subject to bullying, while the lowest rate was found in Greater London, where less than 40 per cent receive abuse.

Researchers also found that only one in five LBGT pupils had been taught about safe sex in same-sex relationships.

There is still a lot of work to do.