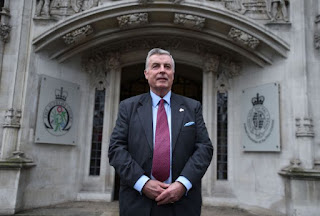 A gay man has won a landmark ruling which will give his husband the same pension rights as a wife would receive in the UK.

The British Supreme Court unanimously ruled that if John Walker, 66, dies, his husband is entitled to a spouse's pension, provided they remain married.

The decision will have an important effect on the entitlement of thousands of civil partners and spouses in same sex marriages in the UK. They will now enjoy the same pension rights and entitlements as those in a heterosexual marriage.

Mr Walker said it was "to our government's great shame that it has taken so many years, huge amounts of taxpayers' money and the UK's highest court to drag them into the 21st Century". And he added: "Finally this absurd injustice has been consigned to the history books and my husband and I can now get on with enjoying the rest of our lives together".