No step back can be allowed 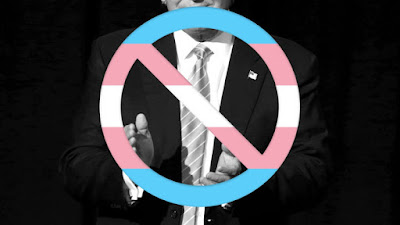 In June of last year, President Obama asked the Pentagon to lift its long-held ban on transgender soldiers serving openly in the military. The Department of Defense was given until July 1 of this year to implement the policy, with LGBT advocates hopeful that transgender soldiers would finally be able to serve openly.

The decision was delayed by the new Administration, but Trump confirmed yesterday that he would reverse the decision put the ban back in place.

Senator Kirsten Gillibrand yesterday said she was working on legislation to reverse the announcement by Trump. Now Gillibrand has the signatures of 44 other senators urging the Pentagon to at least let the Department of Defense finish a review on the issue before bringing in the new policy.

The letter was addressed to Secretary of Defense James Mattis. Gillibrand and the senators wrote: “We strongly oppose this policy change, and urge you to advise the President against it. This announcement contradicts existing Defense Department policies, undermines our military readiness, and puts our transgender service members as well as their commanders in an impossible situation. Transgender Americans who serve in our military put their lives on the line to protect America… They make up a small percentage of the military population, but are reportedly twice as likely to serve in the military as other Americans”.

A new poll has found that a majority of Americans are opposed to Trump’s policy banning transgender people from serving openly in the military. The poll by Reuters and Ipsos found that 58 percent of Americans were in support of trans troops. According to reports, the Pentagon was unaware that Trump was about to announce the rolling back of the Obama-era change.

The decisions sour Trump’s previous claims during his election campaign to be a “friend” of LGBT people. In a speech directly after the Orlando massacre he had claimed: “Ask yourself, who is really the friend of women and the L-G-B-T community, Donald Trump with his actions, or Hillary Clinton with her words”.

Did anyone believe him? Really? 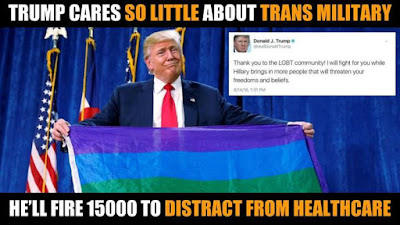