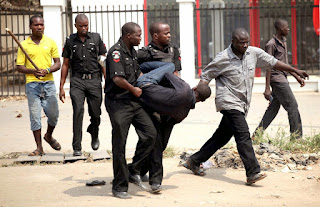 Over 40 men were arrested in Nigeria over the weekend for performing “homosexual acts”.

Following a police raid in Lagos state at a hotel, it is believed that 42 men were arrested.

The men, who are accused of homosexuality, are due to appear in court today. If found to be guilty, they could face up to 14 years in jail.

Witnesses of the arrest who live in the local area claimed that the hotel was known to “harbour homosexuals”. LGBT people in the country face unprecedented homophobia.

It has been illegal to be gay in Nigeria for a long time, but a 2013 law increased penalties and included same-sex unions as well as gay sex in what is criminalised.

Under the barbaric law, people who enter any form of same-sex union are liable for 14 years’ imprisonment, while people who witness, abet and aids the solemnization of a same sex marriage or civil union can face up to 10 years in jail.

Earlier this year 53 men faced criminal charges as police claimed that they had attended a same-sex wedding. 45 of those jumped bail and warrants were put out for their arrest.