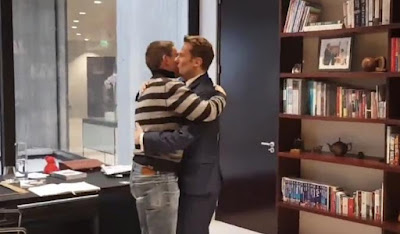 Australia has seen an outpouring of love since the legalisation of equal marriage last week, but grand romantic displays haven’t just been limited to Aussie shores.

The Australian ambassador to France put a smile on faces across the world after celebrating the occasion by proposing to his shocked partner of 11-years just hours after Thursday’s vote.

Sharing a video of the proposal on Twitter, Bendan Berne wrote: “Today was a great day for Australia and for me. HE SAID YES!”

In the video, the 47-year-old can be seen outside the Eiffel Tower in Paris where he explains his intention to propose to his unsuspecting partner Thomas.

“As Australia’s Ambassador to France I am responsible for laying the foundations for the relationship between my country, Australia, and France,” he says.

“Now, as Australia has just approved marriage equality, it is my turn now. My turn to ratify my own relationship with my partner of 11 years, Thomas.

“He is not aware of what I would like to do now. Now, it is only a question for me to pop the question. I am ready to ask the question. We’ll see!”

Approaching his partner, Berne says: “Thomas, we’ve been together for 11 years. As the parliament has just approved the bill on same-sex marriage. I would like to ask the question. Would you give me the pleasure of marrying me? I hope this is the right question!”

Of course, Thomas accepts, before the newly-engaged pair embrace in front of the camera.