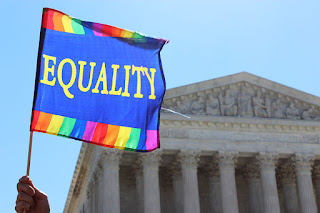 Donald Trump’s July 26 tweet announcing that “the United States Government will not accept or allow Transgender individuals to serve in any capacity in the U.S. Military”.

Trump’s Memorandum set out three policies: a requirement that all transgender personnel be discharged, a ban on allowing trans individuals to enter the military, and a ban on use of Defense Department or Homeland Security Department funds to pay for sex reassignment procedures for military members. The Memorandum assigned the Defense Department the task of figuring out how to implement these policies and reporting back to the president. Prior to that, nobody would be discharged or denied medical treatment.

Four lawsuits were filed in different federal district courts shortly after the policy was announced, with complaints alleging an equal protection violation and a variety of other claims. All sought preliminary injunctions to stop the Trump policies from going into effect while the cases are litigated and specifically asked that the Pentagon adhere to the previously announced January 1 lifting of the ban on transgender enlistment.

The district court judges all accepted the plaintiffs’ arguments that simply announcing the policies and instructing the Defense Department to devise a method of implementing them threw the lives of transgender service members and those planning to enlist into turmoil and uncertainty. The announcement also disrupted plans for sex reassignment surgery for several of the plaintiffs, three of the four judges found.

Each judge agreed that the high standards for issuing a preliminary injunction against the government were easily met, embracing the view that policies treating people adversely because of their gender identity should be reviewed by the same standard as those discriminating on the basis of sex.

On December 22, a three-judge panel of the DC Circuit issued an opinion explaining its refusal to grant a stay, writing that the government has “not shown a strong likelihood that they will succeed on the merits of their challenge to the district court’s order. As the district court explained, the sheer breadth of the exclusion ordered by the Memorandum, the unusual and abrupt circumstances surrounding the President’s announcement of the exclusion, the fact that the reasons given for it do not appear to be supported by any facts, and the recent rejection of those reasons by the military itself, taken together, strongly suggest that Plaintiffs Fifth Amendment claim is meritorious”.

Federal judges may too polite to say so, but the clear implication of their opinions is that Trump lied in his original tweet when he said his decision was made “after consultation with my Generals and military experts”. To date, neither the president nor anybody speaking for him has identified any specific military leaders or experts who were consulted prior to his July tweet. 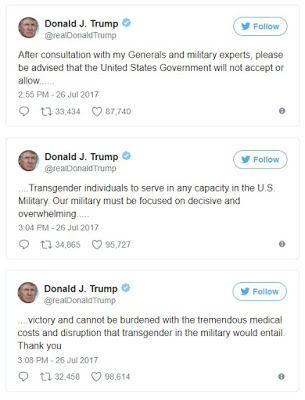