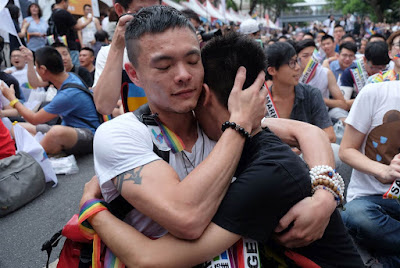 The Council of Grand Justices in Taipei has ruled today that the current law, banning same-sex marriage, is unconstitutional.

The top court decreed that if a law amendment to change the constitution is not introduced with two years, the interpretation of the current law should include same-sex couples.

"If relevant laws are not amended or enacted within the said two years, two persons of the same sex who intend to create the said permanent union shall be allowed to have their marriage registration effectuated at the authorities in charge of household registration, by submitting a written document signed by two or more witnesses in accordance with the said Marriage Chapter", said the court in a press release.

Then, marriage equality can become law in two years.

The ruling came about after a local activist, Chi Chia-wei, challenged Taipei city government’s rejection of his and his long-time partner’s application to marry in 2013. The two were refused a marriage certificate at a local Taipei registration office.

Lisa Tassi, East Asia Campaigns Director at Amnesty International, said in a statement: "The judges have today said yes to marriage equality. This is a huge step forward for LGBTI rights in Taiwan and will resonate across Asia. Lawmakers must act swiftly to ensure Taiwan becomes the first in Asia to make genuine marriage equality a reality.

As today’s ruling makes clear, whoever you love, everyone is entitled to the same human rights and equal protection under the law". 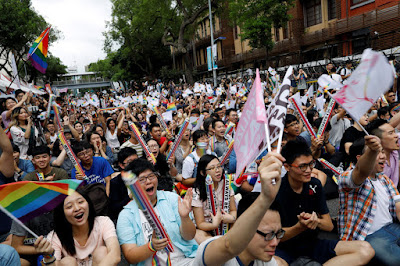 Thousands took the streets in Taipei to celebrate the court decision