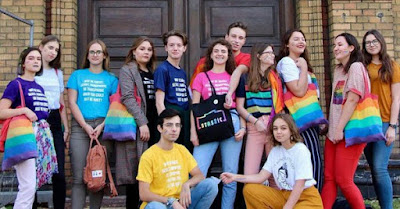 It has run for the past three years and schools are invited to participate in it. LGBT organisations provide information materials to schools that they are free to share with students and they also organize events and conversations in the schools.

But this year, the Minister of National Education, Anna Zalewska, declared any schools participating in the day would breaking education laws. She also said schools would be subject to inspection and even visited some schools herself to ensure they cancelled Rainbow Friday.

Polish LGBT organizations labelled the ban as a sign that government was trying to crackdown on the LGBT community. But some schools went ahead with Rainbow Friday despite the ban. Students posted photos of themselves dressed in rainbow colors and of the decorations they put up in their schools under the social media hashtag #teczowypiatek (Rainbow Friday).