Bolsonaro to remove LGBT content from schools in Brazil 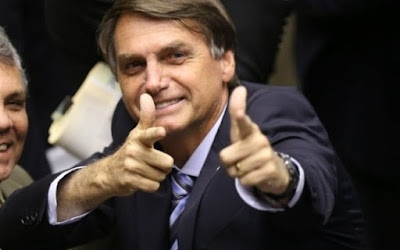 Brazil’s President Jair Bolsonaro has pledged to remove any references to LGBT people from school textbooks and exams.

Bolsonaro and his government has revealed plans to erase all mentions of homosexuality, feminism and violence against women from the texts, and is set to allow the military to take over some public schools.

﻿The right-wing demagogue voiced his desire to wipe out the legacy of liberal Brazilian educator and philosopher Paulo Freire during his campaign, promising to “enter the Education Ministry with a flamethrower to remove Paulo Freire.”

He has described himself as "homophobic and very proud of it," and he mentioned in his inauguration speech he wanted to erase the “aggressive promotion of the gender ideology.”

Bolsonaro has made even more homophobic statements, such as he would be incapable of loving a gay son and would rather have said child die in a tragic accident, that he would punch gay people if he saw them kissing public, and has linked homosexuality to pedophilia, saying “So let’s respect the pedophile’s right to have sex with a two-year-old?"

He also reportedly stated in a YouTube video that he would eradicate questions on gender or LGBT movements from Brazil’s national high school exam.

It's truly tragic that some people continue to think this way and it's even sadder when you think that enough people agree with Bolsonaro to elect him president.