Switzerland has made an important move towards legalizing same-sex marriage.

A parliamentary committee announced that it had been working on creating a draft law which allows marriage equality. The committee also began a consultation process on ways to implement same-sex marriage legalization.

Switzerland currently allows same-sex couples the option of ‘registered partnerships’, which offer some of the same rights as married couples, such as filing joint tax returns.

Switzerland is now lagging behind its neighbors Germany, which legalized marriage equality in 2017, and Austria, which followed suit earlier this year. 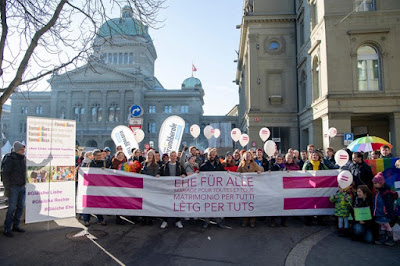 Protest in favour of same-sex marriage in Bern