A gay kiss protest held in Peru for LGBT rights 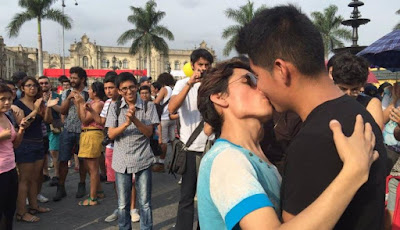 Dozens of LGBT activists have flocked to Lima, the capital of Peru, to stage a mass gay kiss.

Same-sex couples that attended the protest, described as "kisses against homophobia", engaged in a prolonged period of kissing, that is deemed “inappropriate” by a majority of the staunch catholic and conservative groups in the country.

“The streets of Peru are for all, regardless of sexual orientation. Therefore kisses, whether homosexual or heterosexual, should be seen as a normal behavior and not as inappropriate,” a group who helped organise the protest said.

After that, Peruvian President issued a decree prohibiting all forms of discrimination and hate crimes on the basis of sexual orientation and gender identity. But, there have not been more changes since then. 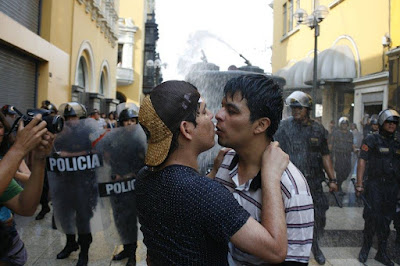 In 2016, Peru police broke up the gay kiss protest with water cannons