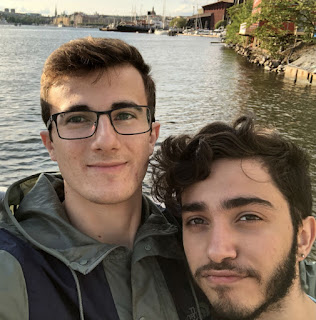 A gay 19-year-old is fighting for survival as he fears being executed in his home country of Iran.

Mehdi Shokr Khoda, who also identifies as Christian, is hoping he will be granted asylum in Sweden in his final appeal. The final decision will be made in two weeks.

Terrified of being deported to Iran, he declared: "I cannot live open as a gay in Iran. They won’t understand something about you. They will just kill you first."

In his corner is his partner, 23-year-old Carlo Rapisarda, originally from Italy. The two of them have been together close to a year.

Mehdi followed his transgender sister, who fled to Stockholm from Iran a few years ago. Because she was granted asylum, he traveled to Sweden in 2017 in the hopes he would be given the same protection.

Their parents are unaware of their two children’s true sexual or gender identity.

At the end of last year, the Migration Board rejected Mehdi’s application as they thought he was lying. They appealed the decision and went to court at the end of January 2019. Carlo testified for their relationship.

"They want evidence," Carlo said. "We live together, we love each other, we’ve known each other a long time. Isn’t that evidence enough?"

The couple also got a letter from the Swedish Federation for LGBT rights. It said: "There’s no doubt. Medhi is gay and in need of protection."

If the asylum appeal fails, Mehdi will have two weeks to leave the country. If he is deported, his life is in immediate danger.