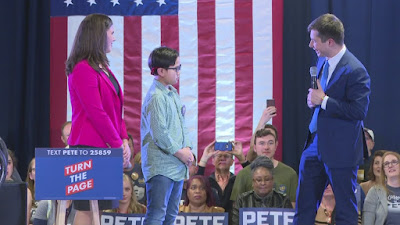 Democratic presidential candidate Pete Buttigieg had a rally at the Crowne Plaza Denver Airport Convention Center. At the end of the night, the candidate took questions from audience members drawn from a bowl.

Colorado Secretary of State Jena Griswold was called on to read the questions. “The next question comes from Zachary, aged 9,” she declared before reading on.

“He says, ‘Thank you for being so brave, would you help me tell the world I’m gay too? I want to be brave like you.'” Buttigieg then invites the young man to join him on the stage.

“I don’t think you need a lot of advice from me on bravery,” Buttigieg said to cheers from the crowd. “You seem pretty strong.”

Buttigieg then took a moment to share advise with young Zachary: “I was afraid that who I was might mean that I could never make a difference and what wound up happening instead is that it’s a huge part of the difference I get to make. I never could have seen that coming and you’ll never know whose life you might be affecting right now, just by standing here. Right now. There’s a lot of power in that,” he said.

He finished with a message of hope and solidarity: “Even if I can’t promise it will always be easy, I can promise you that I’m going to be rooting for you and I think there’s a whole bunch of people here who are going to be rooting you every step of the way,” Pete said.