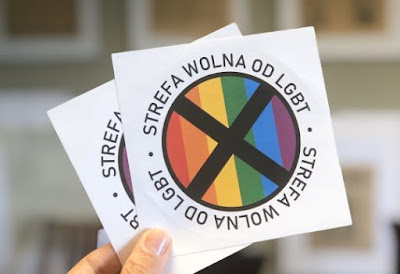 Polish municipalities across an area greater than the size of Hungary have adopted resolutions that critics say discriminate against LGBT people and make intolerance official. A third of Poland has declared itself to be an official “LGBT-free” zone as local municipalities sign a pledge adopting resolutions against “LGBT propaganda”.

Nearly 100 Polish municipal or local governments have now proclaimed themselves to be “free from LGBTI ideology”. Local authorities in these areas pledge to refrain from acts that encourage tolerance and must avoid providing financial assistance to NGOs working to promote equal rights.

European Parliament passed a resolution that strongly condemned the concept of LGBT-free zones last December. It called on Poland to “firmly condemn” LGBT discrimination and to revoke resolutions attacking LGBT rights, and instructed the European Commission to ensure that EU funds are not “being used for discriminatory purposes”.

This warning was ignored by the ruling party Law and Justice (PiS), who are largely responsible for driving the upswing anti-LGBT sentiment in Poland.

Equality parades in Poland are routinely attacked by far-right activists who violently oppose Pride-goers with homophobic chants and explosive projectiles. In fact, Polish hate crime laws provide little deterrent as they do not cover sexuality or gender identity. 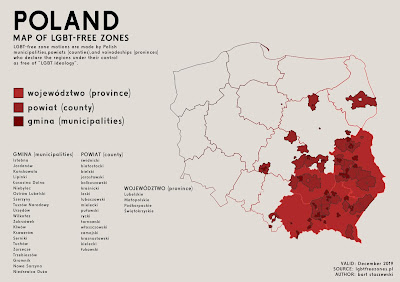 In red, the municipalities which signed the 'LGBT-free' pledge