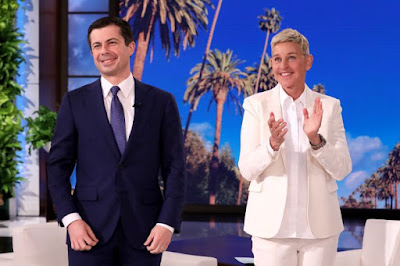 Democratic presidential candidate and former South Bend Mayor Pete Buttigieg told on Ellen DeGeneres show that one of the strongest people he knows "is my husband... Brad Pitt."

The joke was a callback to Buttigieg's appearance on The Ellen Show in April, when DeGeneres asked the candidate about his husband, Chasten Buttigieg, and pointed to him in the audience, only to reveal Brad Pitt. Chasten was in the audience this time, sitting next to DeGeneres' wife, Portia de Rossi.

It followed Buttigieg's response to conservative radio host Rush Limbaugh's controversial Feb. 12 comments over whether America is "ready" to elect a gay man as president.

Asked by DeGeneres about Limbaugh's comments, Buttigieg raised his eyes to the audience and laughed. "Look, I guess he just has a different idea of what makes a man than I do," he said.

"And since when is strength about the chest pounding and the loud-mouth guy at the end of the bar? The strongest people that I know are not the loudest people. They're the ones who have the deepest sense of who they are and what they value and what they care about," he added.

It wasn't all laughs with the candidate. DeGeneres asked Buttigieg about his low polling numbers with minorities, particularly African Americans. While he's had success in the primaries so far, both states Iowa and New Hampshire are overwhelmingly white. "I think it's gotta begin with humility," Pete told Ellen.

"I think the next best thing I can do is to show up, to listen, to learn and to elevate those voices. And so what we're trying to do is make sure that those voices are elevated in my campaign as a way to demonstrate what it will be like in my presidency, too."

Ellen also asked Pete about his commitment to party unity in light of a contentious debate earlier in the week in Nevada. He criticized candidate Sen. Amy Klobuchar for not knowing the name of Mexico's president, and he went after Sen. Bernie Sanders as a socialist who "wants to burn this party down." He also implied that Sanders and former New York City Mayor Mike Bloomberg aren't actually Democrats.

"I think the heat of competition obviously draws out our differences," Pete said. "But it's also important to remember that at the end of the day, I think Democrats share the same broad values. And there's going to be one nominee. And whoever it is, we have got to rally around that nominee if we want to defeat this president, and I'm committed to doing that."

To me, he is the candidate. Watch the enterview below: