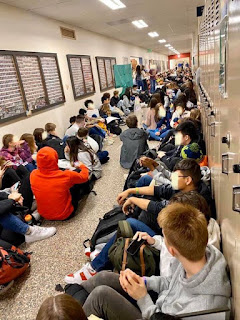 Students at Kennedy Catholic High School in Burien, Washington, staged both a sit-in and a walkout after two beloved teachers, Paul Danforth and Michelle Beattie, were forced to resign for being gay.

People gathered at both protests said in interviews that they demand both the reinstatement of the teachers and a change in the church’s stance on same-sex relationships. Many, including Catholic-school graduate Grace Armstrong, pointed to what she called a contradiction between Jesus’s message of acceptance and love and the church’s policies.

They spilled out onto the lawn and spoke into a microphone in front of a banner that read, “Who would Jesus fire? #LoveisLove.”

A GoFundMe campaign had raised nearly $35,000 to help Paul and Michelle cover expenses until they can find other jobs.

Supporters of the teachers also protested outside the local Seattle Archdiocese offices, watch it below: