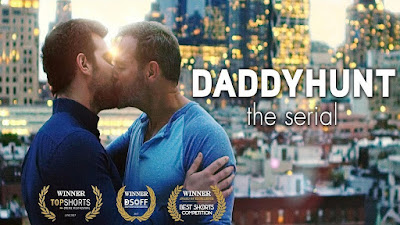 A young man mistakes his salt&pepper older neighbor for a handyman, which begins a gay romance story for the modern age. This Award Winning 'Short Movie Version' combines Seasons 1, 2 and 3 of the web series, which was originally conceived to promote the gay dating app 'Daddyhunt'.

In December 2014, Carl Sandler launched Daddyhunt, a mobile, gay dating-app for older men and their admirers. He wrote and produced a web series to promote his app called Daddyhunt: The Serial (2016). It consisted of five episodes that were between 1 to 2 minutes in length. The whole thing was 7 minutes total. It was a very simple and adorable story about an older man who meets a younger guy in a new apartment building but a misunderstanding threatens their coupling.

In April 2017, a second season was released that picks up right where the first season left off. It was a little bit longer. This time, it was divided into seven episodes or seven parts, each part being about 2 minutes or less with the exception of the last part. The second season in total was 13 minutes and involved the two men discovering their different sexual habits and worrying if those differences mean they won’t be a good match. The last part seemed to suggest a fairy tale ending with the two walking off happily in love.

In October 2018, season 3 continues the saga of two men who connect on the social network Daddyhunt. The daddy and boy’s happy romance is tested when a past love brings to the surface some insecurities and doubts that have profound consequences on the couple. Meanwhile, the BFF meets his romantic match in a self-depreciating dork, but things take a turn for the worse once his HIV status is discovered. And the ex’s hopes of a reconciliation with the daddy may be within reach, with a little help… Two months later, all their lives converge and each needs to decide whether to let history hold them back or to take a second chance on love.