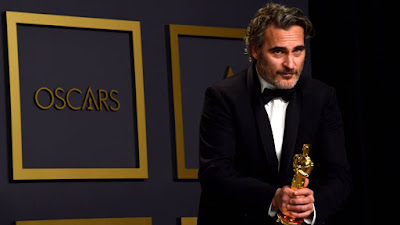 Joaquin Phoenix is continuing to use his platform for good and shining light on progressive causes.

In an emotional acceptance speech for the Best Actor in a Leading Role award, which he won for his role as the controversial DC Comic villain Joker, the veteran actor talked about how one of the greatest gifts being a notable celebrity has given him is "the opportunity to use our voice for the voiceless."

He then talked about his support for many different causes for equality, including women's rights, animal rights, and queer rights.

"I do not feel elevated above any of my fellow nominees or anyone in this room, because we share the same love, the love of film and this form of expression has given me the most extraordinary I don’t know what I’d be without it. But I think the greatest gift that it has given me, and many of us in this room, is the opportunity to use our voice for the voiceless," Phoenix said.

"Whether we’re talking about gender inequality or racism or queer rights or indigenous rights or animal rights, we’re talking about the fight against the belief, one nation, one race, one gender or one species has the right to dominate, control and use and exploit another with impunity," he added.