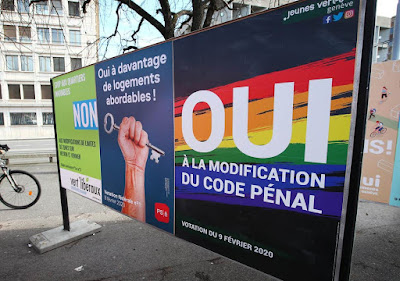 The support of the extended anti-racism law, aimed at improving protection against discrimination based on sexual orientation, are likely to win about 60% of the vote.

The reform was approved by parliament in 2018, but a small ultra-conservative religious group, supported by the right-wing Swiss People’s Party, then collected enough signatures to force a nationwide ballot.

Opponents, who forced the referendum ballot, admitted defeat but vowed to fight against further amendments for other social minorities.

Campaigners from the LGBT community described the result as a "clear signal against hatred". They said they will continue to their political fight for same-sex marriage due to be discussed in parliament next month.