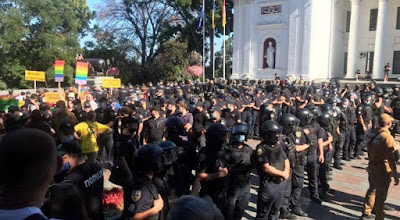 Odessa Pride organisers said that peaceful Pride event on Sunday afternoon had only been underway for ten minutes were set upon by the neo-Nazi thugs, who were bearing the banners of a ‘Traditions and Order’ far-right nationalist group, in Ukraine.

Pride organisers say that despite assurances from police that they would ensure the event was protected, officers did not react fast enough to the attack, with LGBT activists abused and attacked with pepper spray before police eventually sought to break up the conflict, forming a barrier surrounding the small pro-LGBT group.

Police said that 12 people were arrested for petty hooliganism and disobeying the instructions of a police officer, while three minors “were handed over to their parents”. Two officers were hospitalised with injuries after the clash, the police department adds.

LGBT people have few legal rights in Ukraine. The country has passed some basic gender recognition laws and discrimination protections as it seeks to align with EU law, but there is no recognition for same-sex relationships, and gay couples are banned from getting married or adopting children.

Watch the video below:
Publicat per Ben Aquila a 7:03 AM