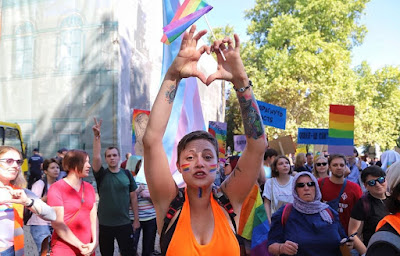 LGBT rights activists organized the 5th march for equality in Odessa (Ukraine). According to organizers, local authorities appealed to the court which banned the pride. The original route and time were banned and the organizers had to change the route.

Hundreds of marchers were protected by police officers. Demonstrators took a walk from Primorskii boulevard to the Dums’ka Square. They chanted: “Human rights are above all!”, “Love is above all”, but the main slogan was “Odesa Pride is for a free city!”

Police did encounters a small group of right-wing protesters who were cordoned off and held back from disturbing the march.

A number or religious organizations in Odessa were taking a stand against the planned Odessa Pride 2019 festival. Representatives of a number of churches and organizations sent a letter to Mayor Gennady Trukhanov, calling on him to shut down the LGBT festival “for the sake of preserving peace among the residents an guests of the city”.

Last June, several thousand activists pride supporters have held a march in Ukrainian capital of Kyiv, despite opponents’ attempts to block them. 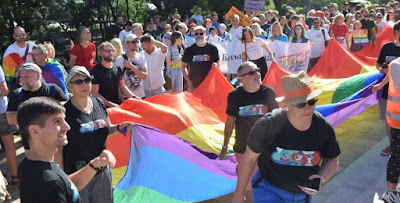