A divided Supreme Court ruled today that states cannot ban same-sex marriage, establishing a new civil right and handing gay rights advocates a victory that until very recently would have seemed unthinkable.
In a 5-4 ruling, Justice Anthony Kennedy wrote for the majority with the four liberal justices. Each of the four conservative justices wrote their own dissent.
The language of Kennedy's opinion spoke eloquently of the most fundamental values of family, love and liberty.
"No union is more profound than marriage, for it embodies the highest ideals of love, fidelity, devotion, sacrifice and family," Kennedy wrote. "In forming a marital union, two people become something greater than they once were."
"Their hope," Kennedy wrote, "is not to be condemned to live in loneliness, excluded from one of civilization's oldest institutions. They ask for equal dignity in the eyes of the law. The Constitution grants them that right."
Today is a historic day!
The Supreme Court's full decision here. 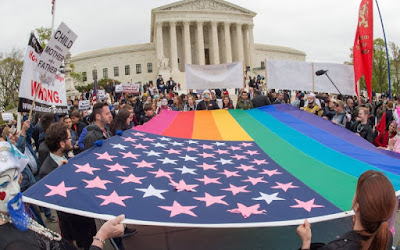