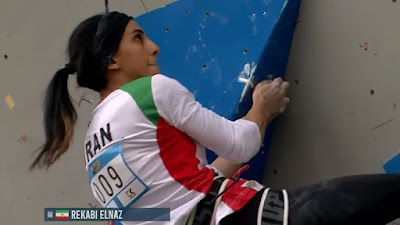 Iranian sport climber Elnaz Rekabi, 33, did not wear a hijab at an international competition in South Korea, in open defiance of her country's mandate, amid fierce protests against the Islamic Republic's restrictions on women's dress.

The gesture came one month into protests in Iran over the death of Mahsa Amini, arrested by Tehran police for allegedly violating the dress rules, which have transformed into a movement against the obligatory hijab and the Islamic republic itself.

Some media outside of Iran warned she may have been forced to leave the country early by Iranian officials and could face arrest back home. The Iranian authorities routinely pressures activists at home and abroad, and nothing had been heard since the event from Rekabi.

They also reported that the head of Iran's climbing federation had "tricked" her into entering the Iranian embassy in Seoul and that she would then be taken directly to the airport. They said her mobile phone and passport had been taken from her.