Habib Khan, an award winning journalist, asked Afghans a simple question. The answers they have given are moving and show the devastation that the Taliban-Haqqani occupation force has placed on the Afghan people.

His question was: What was your profession when Afghanistan was free? And what do you do now?

All the answers show the same reality:

For that reason, they are choosing to leave for their own safety or economic hardships. 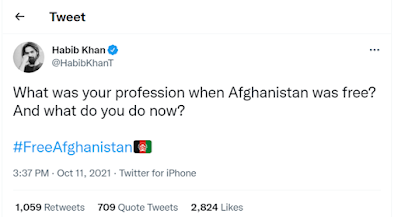