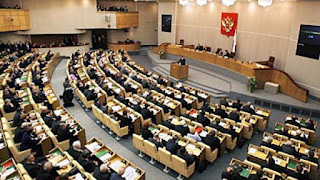 Russia’s Duma will vote on banning gay citizens from coming out on January 19th.

Two senior Russian Communist MPs Ivan Nikitchuk and Nikolai Arefyev have presented a bill calling for people who come out as homosexual to serve up to 15 days behind bars.
Any public displays of affection among gay men will result in jail time and a fine of 5,000 rubles ($80). The proposed bill is only targeting gay men as women, according to the lawmakers, are more “reasonable” and can “manage their emotions”.

“We have our own idea of honor and conscience, and we must respect tradition. The scum that comes to us from the West is unnatural to Russia. These unconventional sexual desires do nothing but disgust normal, smart, healthy people”, Nikitchuk said.

From bad to worse in Russia.