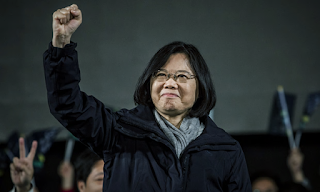 Taiwan made a bold step today by electing Tsai Ing-wen of the Democratic Progressive Party as President. As well as being the country’s first female President, Ms Tsai is an outspoken independence campaigner who has called for the country to gain more autonomy from China.
She is also a strong advocate for LGBT rights and same-sex marriage. In a video released on Chinese Valentine’s Day last year, she featured three same-sex couples alongside straight ones.
She has also pledged her support for the country’s Pride parade, lighting up her party HQ in the colours of the rainbow flag.
Ms Tsai said: “I support marriage equality. Every person should be able to look for love freely, and freely seek their own happiness”.