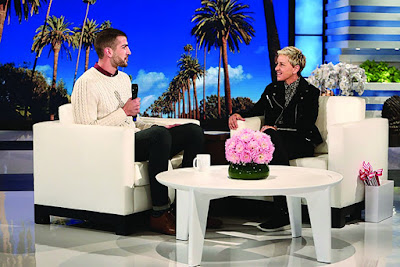 Earlier this week Ellen DeGeneres surprised Trent Bauer, a senior at Shippensburg University in Shippensburg, Pennsylvania, by bringing him on stage after he participated in a segment called “White Men Can Dance”.

Little did Bauer know that his best friend Steph had written DeGeneres and outed him not only as one of Ellen’s biggest fans, but also as one of the “most selfless and special” people she knew. She also told the talk show host about Bauer’s dedication to LGBT activism at his school, where he serves as the university’s first LGBT student coordinator.

“I wrote to the president [of the school] and asked them to create [the position],” he nervously told DeGeneres once he was seated across from her. “As a student of the LGBT community, I felt there was a... lack of resources. So I wrote them and asked if I could do some research to develop a center on campus and... we’re kind of in the process of doing that, so I’m really excited”.

As if getting to meet Ellen wasn’t amazing enough, Bauer, who says he is applying to join the Peace Corps after he graduates, was in for one more giant surprise: $10,000 to help him pay back his college loans.

Sure, do-gooders should never expect to be rewarded for their acts of bravery or kindness but there’s really no feeling like watching Ellen toss a giant novelty check in the lap of an incredibly deserving person.