"Yes" is winning in Australian poll on gay marriage Australians appear to be unmoved by anti-same-sex marriage warnings of creeping gender ideology, social destruction, or sexual confusion, with the case for change surging ahead.

With more than a month to go in the government’s controversial postal survey, an aggregation of public polling and some recent unpublished research shows the “yes” case for legalising same-sex marriage has maintained its strong lead among ordinary voters.

Nearly 60% of eligible voters have already returned their surveys with a month to go before the deadline. Stirton’s summary of recent polls shows that 65% say they voted “yes”.

The result will be announced on November 15th. 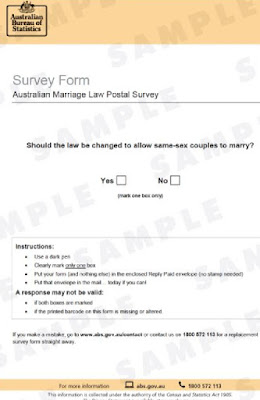