Taiwan waits for same-sex marriage to be legalised 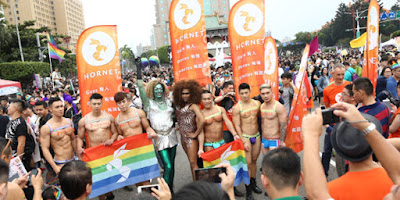 A sea of rainbow flags and glitzy costumes filled downtown Taipei on Saturday as tens of thousands marched in Asia's largest gay pride parade, the first since Taiwan's top court ruled in favour of gay marriage.

The island looks set to become the first place in Asia to legalise gay marriage after the constitutional court said in May that laws preventing same-sex unions violated the guarantee of freedom of marriage. It gave the government two years to implement the decision.

The anticipation was felt at Saturday's parade, as dancing crowds in colourful wigs and sequined outfits made their way through the capital's centre alongside vans blasting music. Many spared no effort in dressing up, from a man posing in a sweeping bridal dress and a tiara to another donning an inflatable dinosaur costume.

But behind the celebrations, some are frustrated at the lack of progress in changing the current marriage laws since May.

"A lot of people cannot afford to wait for two years", said Joseph Wu, 46, dressed in a matching kilt and rainbow turban with his partner of six years. "We just want the same things heterosexual couples have. We also do our military service, we pay the same taxes, so why can't we have the same thing?" he said.

Gay rights activists expressed frustration last month when a Taipei administrative court rejected a request from a lesbian couple to marry, saying they can register only when relevant laws are in place. Still, Taiwan is seen as one of the most progressive societies in Asia when it comes to gay rights.