A movie about gay love at professional soccer 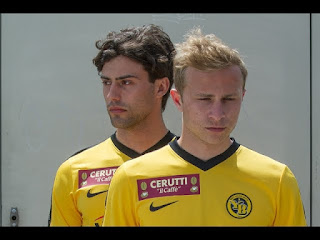 A movie about gay athletes was released this week. Mario, a dynamic and realistic movie of how gay professional soccer players are still seen as out of step in the 21st Century.

Veteran Swiss filmmaker Marcel Gisler directed the film which follows an unexpected love affair between soccer player Mario (Max Hubacher) and Leon (Aaron Altaras) the new striker from Germany, but the path of gay love in this straight world is not an easy one.

Before long, their relationship is discovered by their team members and rumors begin to spread. Mario realizes this jeopardizes his career as a professional soccer player, but he does not want to lose Leon at any price. He has to make a decision.

The movie had its premiere at BFI Flare London LGBTQ Film Festival this week and will premiere in North America at Miami’s Outshine Film Festival on April 21.

About same issue, should to see Wonderkid (2016), the story of a young closeted gay professional soccer player.

Watch the Mario's movie trailer below: