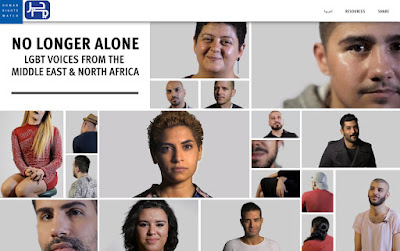 Many areas of the world remain mired in an era of state-sponsored repression, criminalization, and severe social stigma for their LGBT communities.

In a new video series “No Longer Alone”, Human Rights Watch (HRW) and the Arab Foundation for Freedoms and Equality (AFE) are highlighting queer voices from the Middle East and North Africa.

Though they live in parts of the world notorious for their mistreatment of LGBT people, the subjects of the series each illustrate the strength and unity the global community finds in one another.

HRW writes: “They are telling their stories, building alliances, networking across borders, developing national and regional movements, and finding creative ways to combat discrimination based on sexual orientation and gender identity. Through the campaign 'No Longer Alone,' they offer messages of support and encouragement to LGBT people living in Arabic-speaking countries in the Middle East and North Africa.”