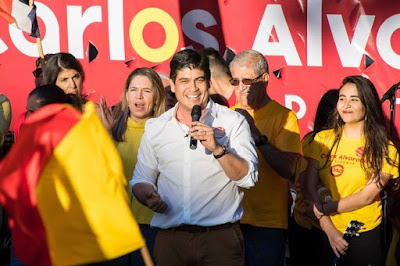 Carlos Alvarado, a former minister and fiction writer, had 61 percent of the vote with results in from 95 percent of polling stations, a far bigger lead than predicted by opinion polls that foresaw a tight race.

Voters finally rejected the evangelical pastor, Fabricio Alvarado, who had jumped into political prominence after he came out strongly against a call by the Inter-American Court of Human Rights for Costa Rica to allow same-sex marriage.

The victor wrote in his Twitter account, "Let's celebrate our 200 years of Indpendence with a government worthy and up to date with the times. Today, the world is watching us and we sent a beautiful democratic message."

Congratulations to the new president!