Children of same-sex couples showed fewer psychological problems than children of heterosexual couples, a new research on sexual orientation and parenthood conducted in Italy found. The researchers were based at the Sapienza University of Rome, Italy, and the Population Research Center at the University of Texas at Austin, US.

The study, titled “Same-Sex and Different-Sex Parent Families in Italy: Is Parents’ Sexual Orientation Associated with Child Health Outcomes and Parental Dimensions?” and published in the peer-reviewed Journal of Developmental and Behavioral Pediatrics.

Seventy gay fathers through surrogacy, 125 lesbian mothers through donor insemination, and 195 heterosexual parents through spontaneous conception, all with children aged 3 to 11 years and living in Italy, were compared on children's psychological adjustment and prosocial behavior, as well as parental self-efficacy, dyadic adjustment, family cohesion, and flexibility. Associations among family structures, family processes, and child health outcomes were also tested.

Participants were matched for child characteristics. Self-report questionnaires were administered through an online survey to the parent who identified as most involved with the child on a day-to-day basis. Multivariate analyses of variance and multiple linear regressions were conducted.

Children of gay fathers and lesbian mothers were reported as showing fewer psychological problems than children of heterosexual parents. Irrespective of the family type, girls were reported as more prosocial than boys. With respect to parental dimensions, gay fathers described themselves as more competent and satisfied with their couple relationship than did heterosexual parents; they also reported higher levels of family cohesion and flexibility than did lesbian mothers and heterosexual parents. The effect of the family type was not predictive of child health outcomes once family process variables were taken into account.

Findings suggested that children with same-sex parents fare well both in terms of psychological adjustment and prosocial behavior. The present study warns policy makers against making assumptions on the basis of sexual orientation about people who are more suited than others to be parents or about people who should or should not be denied access to fertility treatments. 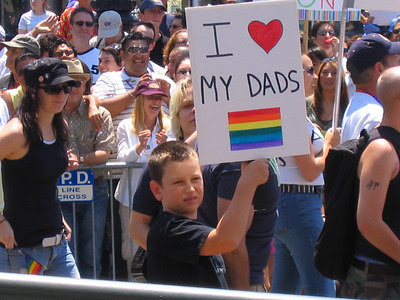