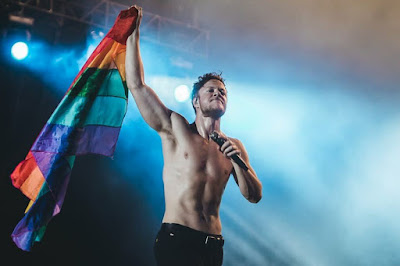 The band were headlining the festival in Salt Lake City (Utah) which aims to support LGBT youth by donating the proceeds to LGBT charities and half way through their set, Dan stopped and addressed the crowd.

Dan, who identifies as straight, paused about midway through the performance, saying: "I was just informed that we have officially raised our goal tonight of over £1 million. You did this by coming tonight from all walks of life [and] all sides. We’ve got one last song for you, we love you."

"To our LGBT youth, stay with us every day. We need you, we love you [and] we accept you. Your love is valid, it’s pure, it’s true [and] it’s beautiful. We stand with you. Love Loud will be here. Peace, love, equality, we’ll see you again soon."

In January, Dan starred in Mormon LGBT film to end the persecution of gay people in the religion. Dan, who is a Mormon himself, featured in the Sundance Festival documentary Believer, which details his journey as an LGBT youth advocate for Mormons.

Intending to put a face to the faceless and a voice to the voiceless," Dan said he hoped that the film will persuade leaders of the religion to recognise their "shaming" approach towards LGBT Mormons.