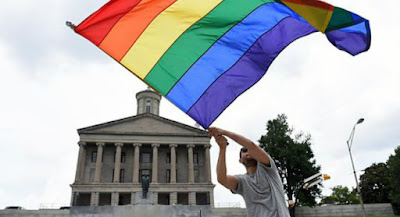 More than 120 rabbis and pastors from across Tennessee have added their names to a statement opposing the six anti-LGBT proposals, which were introduced in the state’s Republican-dominated legislature this year.

Progressive religious leaders in Tennessee have joined forces to denounce a slate of bills that would curb the rights of the state’s queer residents.

The clergy statement, which was organized by the Tennessee Equality Project, sought to gather an array of voices from across the state. While the project said some of the signers were evangelical leaders, most were not.

The statement declares: “They promote discrimination rather than justice and demean the worth of LGBTQ people in our state. We call on people of good will to join us in speaking out for basic fairness."

Rev. Mary Louise McCullough, pastor at Nashville’s Second Presbyterian Church and one of the statement’s signers, called the bills “regressive politically, theologically and intellectually.” And she added: “Being a person of faith means speaking out when necessary to resist and protect people from this kind of hostile act on the part of the state.”

Rev. Paul Purdue, senior pastor at Belmont United Methodist Church, said he signed the joint statement because he believes legislation that categorically denies certain groups the ability to adopt, get married or conduct business is “oppressive and unjust.”

The six bills, called 'slate of hate', would provide legal protections for Tennesseans with conservative religious beliefs to discriminate against the LGBT community in various ways. The bills have a wide range of specific goals, including banning same-sex marriage in the state, protecting adoption agencies that don’t want to place kids with LGBT parents, and making it a crime for transgender people to use locker rooms that match their gender identities.

A big step back in defense of LGBT rights!! 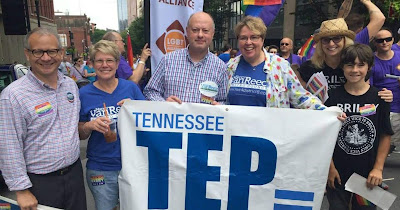 We all stand with Tennessee Equality Project!!