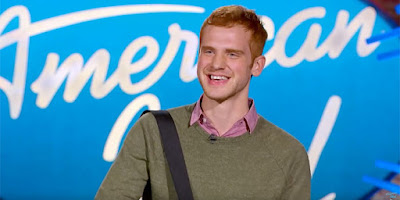 Jeremiah Lloyd Harmon did a lot of his singing while working as a janitor in his father’s church, but he stunned American Idol judges with a heavenly performance.

The gay son of a Catonsville pastor, Harmon was the last person to appear in front of Lionel Richie, Katy Perry and Luke Bryan on the day he auditioned.

﻿Perry, the daughter of evangelical Pentecostal pastors who has been open about her struggles with her religious upbringing, immediately related to Harmon as a fellow pastor’s kid and told him: “I feel you, I know you.”

Harmon then made his mark performing a song he wrote, “Almost Heaven,” sitting at the piano. In the audition tape, Harmon says the song is about questioning whether there is place in Heaven for someone like him. He also discussed realising he was gay at nine years old, and having to then come out to his religious family.

“There’s times when I do feel along. The hardest part for me is seeing how difficult it is for my family. I’m hopeful it’s an experience that we can learn to grow together.” As for his own religious views, he said: “All of my religion has been stripped down to I love you, no matter what.”

Harmon’s heartfelt performance made a positive impression on the judges. “You need to lose the broom my friend,” Richie told him.