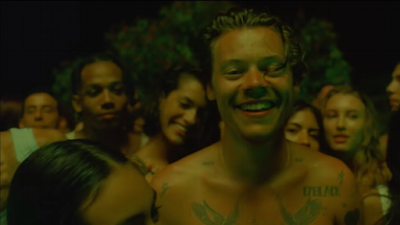 After months of hints and teases about new, sexually charged music, Styles unleashed the thirst-quenching video for his new single, ‘Lights Up’.

Filmed in Mexico, the clip finds the ex-One Direction singer topless and glistening with sweat, as he writhes with a scantily-clad crowd of men and women.

Released on National Coming Out Day, the track features Styles singing about “step[ping]into the light” of a new identity and “never going back”.

Fans put two and two together and got 100 percent queer, with many hailing the track a “bisexual anthem”.