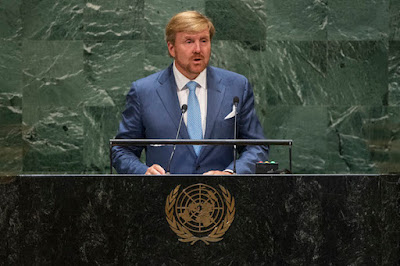 At the General Assembly of the United Nations in New York, Dutch king Willem-Alexander expressed the need for worldwide LGBT rights. He urged countries to make laws to protect sexual minorities.

“The Kingdom of the Netherlands welcomes the fact that the rights of lesbian, gay and transgender people and of other minority communities are being laid down in law in more places around the world. We hope this trend continues. But ultimately, words must translate into action,” His Royal Highness told the world leaders.

The king also expressed the inequality all around the world regarding these minorities. “The fight against discrimination, whether open or hidden, must continue on every continent,” he added.

The head of state is not the only Dutch representative who is pushing for sexual rights. The Dutch minister for Foreign Trade, Sigrid Kaag, is opposing a conservative proposal by the US. Also, other countries such as Hungary and Poland want to change the description of worldwide rights for sexual healthcare. The group wishes to change for example “sexual and reproductive health” to “health for young people” in official UN documents. Kaag is committed to maintain the existing rights.

The Washington Post reports 58 countries are in support of Kaag’s approach. Kaag expressed her fear for the consequences for women and LGBT people, once the access to sexual healthcare becomes more difficult. She worries these groups might be excluded from the needed healthcare.

The openly gay prime minister of Luxemburg also made a statement on LGBT rights in his speech. “Being gay is not a choice, but not accepting it is a choice. Homophobia is a choice and we have to fight against it.”