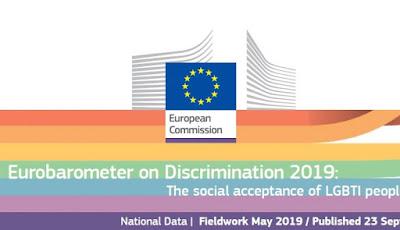 European Commission released the new special edition of the Eurobarometer on discrimination. Its chapter 3 is focused on LGBT rights.

More than three quarters of respondents (76%) agree LGBT people should have the same rights as heterosexuals people, with the majority (51%) saying they "totally agree". More than seven in ten (72%) agree there is nothing wrong in a sexual relationship between two persons of the same sex, with 47% totally agreeing. Finally, almost seven in ten (69%) agree same sex marriages should be allowed throughout Europe, with 45% saying they "totally agree" with this.

Since 2015, respondents have become more accepting of each of these aspects of equal rights for LGBT people in Europe. They are more likely agree same sex marriage should be allowed throughout Europe (+8 pp), that LGBT people should have the same rights as heterosexuals (+5% pp) and that there is nothing wrong in a sexual relationship between two persons of the same sex (+5 pp).

Although overall support for these aspects of LGBT rights and relationships is strong, there is considerable variation between countries in Europe. Almost all respondents agree LGBT people should have the same rights as heterosexual people in Sweden (98%), the Netherland (97%), Spain (91%) and United Kingdom (90%). In contrast, only think in the same way 31% in Slovakia, 38% in Romania and 39% in Bulgaria.

Sweden, the Netherlands and Spain are the
countries where LGBT equality is majority