Bangladesh gets its first transgender news anchor on Women’s Day 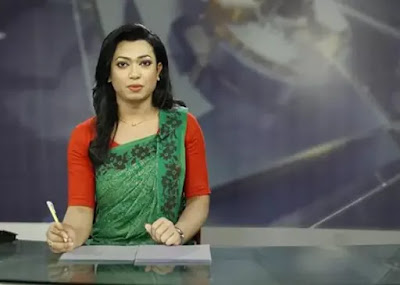 Tashnuva Anan Shishir, who previously worked as a rights activist and actress, debuted on Dhaka-based Boishakhi TV on International Women's Day. She read a three-minute news bulletin, and after finishing cried as her colleagues applauded and cheered.

"I was very nervous, I was feeling so much emotional, but I had in my mind that I must overcome this ordeal, this final test," Shishir said.

Born Kamal Hossain Shishir, she said she found in her early teens that she was stuck in a man's body and behaved like a woman. She said family members, relatives and neighbors started teasing her and she was bullied and sexually exploited. She started feeling that it was impossible to continue living and attempted suicide, she said.

After fleeing her home town, she lived alone in the capital Dhaka and in Narayanganj. Determined to study, she went on to gain a masters in public health in Dhaka. She also approached a number of TV stations to ask for work, but said that only private station Boishakhi was "brave enough to take me in". And she finally got it.

Around 1.5 million people are transgender in Bangladesh and face discrimination and violence, with some forced to survive by begging or working in the sex trade. But in 2013, the Bangladeshi government allowed trans people to be recognised as a separate gender and five years later they were allowed to register to vote as a third gender.