Alan Turing is the new face of £50 note 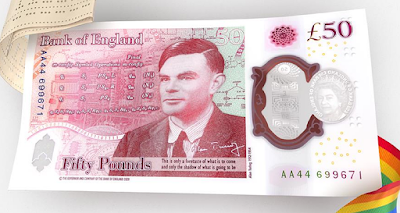 As already announced, the new £50 bearing the face of LGBT icon and Second World War codebreaker Alan Turing has been revealed by the Bank of England.

The Treasury note, which is the last British banknote to make the transition from paper to polymer, will enter circulation on 23 June this year, on what would have been the mathematician's birthday.

The design  uses a famous 1951 portrait of Turing by Elliott & Fry, which is part of the Photographs Collection at the National Portrait Gallery. Other design features include a table and mathematical formulae from Turing, which is widely considered to be the foundation of modern computer science. And also depicts a ticker tape featuring Alan Turing’s birth date in binary code.

Born in London in 1912, Turning went on to study at Cambridge before becoming a key figure in the breaking of German ciphers at Bletchley Park during the Second World War. His work cracking the German Enigma code is widely credited with bringing the war to a more swift end.

In 1952, Turing was convicted of gross indecency because of his homosexuality, pleading guilty and opting for a course of hormone treatments that effectively amounted to chemical castration rather than being imprisoned. He was also immediately barred from working for the British security services.

Turing died just two years later, at the age of 41, as a result of cyanide poisoning which ruled to be suicide. Over 60 years after, Queen Elizabeth II has granted him a posthumous pardon for "a judgment that is now considered unfair and discriminatory". 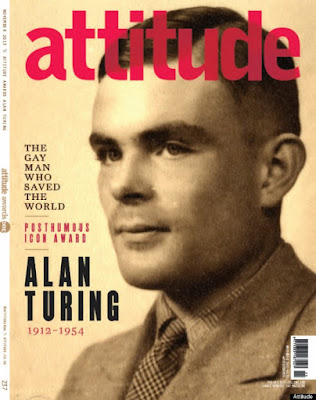 Alan Turing the gay man who saved the world