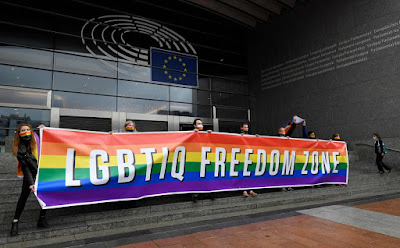 The European Union has been declared an “LGBT freedom zone” in a powerful response to Poland and Hungary’s growing discriminatory policies against people from the queer community.

The members of the European parliament voted in majority to adopt the symbolic resolution by 492 votes in favour, 141 against it and 46 abstentions in rebuttal to Poland where local authorities declared itself an ‘‘LGBT free zone” two years ago.

Shortly before the parliament was set to declare its resolution to support rights of LGBT people, the Polish government announced that it was planning to bar those living in same-sex relationships from adopting children even as single parents. Same-sex relationships are illegal in Poland and the ruling government already bans same-sex couples from adopting children together.

The EU resolution declared that members of the LGBT community “in the EU should enjoy the freedom to live and publicly show their sexual orientation and gender identity without fear of intolerance, discrimination or persecution”.