Robin comes out as bisexual in latest Batman comic 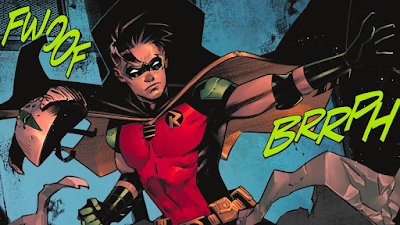 More than 80 years since he was first introduced to readers, and after decades of homoerotic subtext with his companion Batman, comics’ most trusty sidekick Robin has canonically come out as LGBT.

Tim Drake, the third Robin to accompany and ally with Batman's defense of Gotham City, has come out as bisexual in the latest issue of Batman: Urban Legends #6.

Sum of Our Parts is the product of writer Meghan Fitzmartin, artist Belén Ortega, colorist Alejandro Sánchez, and letterer Pat Brosseau, and sees Tim try to process the insecurities that weigh down his relationships.

When he meets up with Bernard, a friend from school, Bernard is captured and intended to be a sacrifice by the Chaos Monsters. When the two reunite and defeat their enemies, Bernard explains that Tim is the reason why he realised that he was not heterosexual and that he understands who he is and what he wants.

Tim then begins to see that, though he loved his girlfriend Stephanie deeply, he may also have an attraction to different genders. He visits Bernard at his home to state his feelings out loud, and when Bernard asks him on a date, he accepts.

Drake is just the latest in a run of superheroes to be written as LGBT, including Batwoman, Harley Quinn, Poison Ivy, married couple Midnighter and Apollo, and, most recently at Marvel, Captain America.

You can buy Urban Legends #6 here. 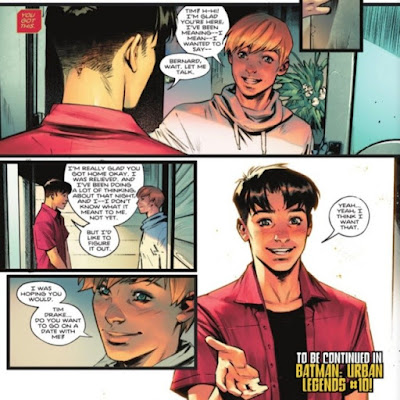