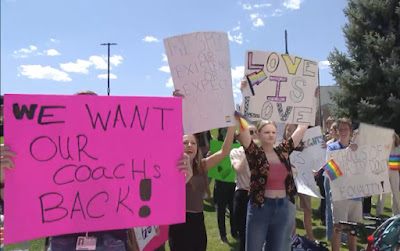 Students walked out of class in protest of their school allegedly forcing a volleyball coach to quit for being gay. Inoke Tonga, who worked at Valor Christian High School in Highlands Ranch, Colorado, shared his ordeal on social media.

He stated that he was called into a meeting with the campus pastor and athletic director, where he was told to “become a child of God” or be forced to leave his job as head coach of girl’s volleyball at the school.

After persistently being asked about any “changes in lifestyle that were life-changing”, the pastor and athletic director accused Tonga of being gay based on social media posts they had seen, something which they felt went against the school’s values and beliefs.

After that, students at the school have shown their support to the volleyball coach by walking out of class and demanding significant change to the school’s policies and culture. During their protest, they stood outside the school holding signs saying “love is love,” “respect our existence or expect resistance,” and “schools of quality don’t fear equality”.