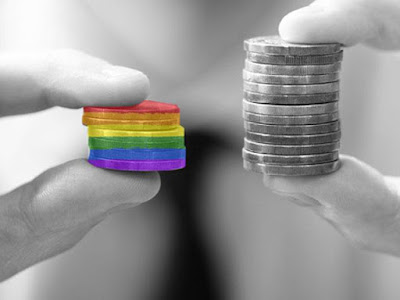 The wage gaps that exist between men and women and between white and black people have received a lot of attention in recent years. But there’s another wage gap that tends to be overlooked between heterosexuals and LGBT people.

Not all employees are paid the same for the same type of work. Decades of research document the significant gaps in earnings based on gender and race. But it is important to remember that women and people of color are not the only ones who see significant disparities in earnings.

Unfortunately, many gay and transgender workers receive unequal pay for equal work. What’s worse, these same workers lack the necessary legal protections currently afforded to other categories of individuals that would help combat and correct pay inequities that exist on the basis of sexual orientation and gender identity.

But if the numbers reflect a broad average, why do such differences arise? One possible explanation is the work choices that gay people make. Research suggests gay men are more likely to avoid occupations that are more male-dominated than other men (which includes the best paid jobs), while lesbian women are more likely to avoid female-dominated occupations than other women (which are typically worse paid). Lesbians may also earn more because they tend to work longer hours.

A key question is whether these differences in wages and choice of employment are driven by prejudice, or whether they are the result of some innate, work-relevant traits of gay people related to their preferences or skills. Probably both, discrimination against gay people is a global issue, but it may be because they make different educational choices. For instance, LGBT students are less likely to finish school and attend university than other students.

It is a fact that many workers receive less pay due to sexual orientation and gender identity discrimination. The gay wage gap, a new discrimination at work which adds to the rest of discriminations suffered by LGBT people. Enough is enough! 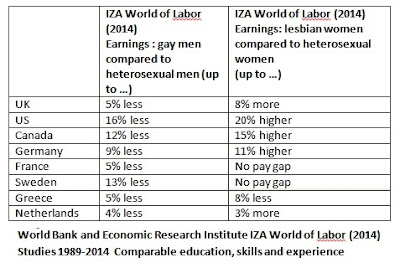