Persecutions and tortures of gay men still continue in Chechnya 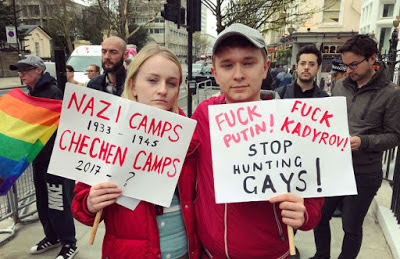 Persecutions and tortures of gay men still continue in Chechnya, and nothing happens at international level. The gay purge continues in Chechnya under Russian protection, and Chechen head Ramzan Kadyrov denies with sarcasm the existence of gay people in Chechnya.

The Russian LGBT Network has recently reported that Chechen men abducted Ibragim Selimkhanov in Moscow and forcibly returned him to Chechnya’s capital Grozny, where authorities interrogated him about gay people in the region.

Just before that, Russian police also apprehended Salekh Magamadov and Ismail Isaev, who had escaped Chechnya, and returned them to Grozny, where they remain in detention and are standing trial for posting anti-government messages on social media.

Since 2017, Chechen authorities orchestrated lethal purges of men perceived to be gay. As reports of the purge surfaced, gay men began escaping Chechnya, knowing the dangers they faced.

It was also denounced a plan for “the final solution of gay issue” and the opening of the first concentration camp in the world for sexual minorities since Nazi regime did.

The 2020 award-winning documentary “Welcome to Chechnya” details the purge and also documents the experience of lesbians, whose horrific ordeals are usually perpetuated by family members. Watch the trailer below: